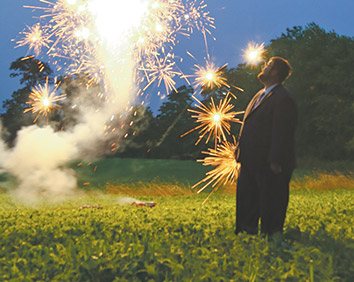 Muncie attorney John H. Brooke has a flair for providing hands-on help to his clients in the fireworks business. Say someone’s unavailable at the last minute to fire off a town’s Fourth of July display. Brooke can handle that.

“That’s a unique service we have,” Brooke said with a laugh.

And if Brooke is not in the office, Brooke Law attorney John M. Stevens can help.

“I still shoot a few shows a year,” he said. Stevens worked his way through school putting on professional displays, and now he works at Brooke’s firm where more than 70 percent of the business is fireworks related.

“I did not really see these two merging,” Stevens said of his summers lighting up the skies and his subsequent pursuit of the law degree he attained in 2008. First admitted to practice in Iowa and Illinois, when he had the opportunity to team up with Brooke, Stevens said, “It occurred to me I had these two skills that weren’t mutually exclusive.”

Brooke will be at the controls for the Independence Day fireworks show in his hometown of Albany, Ind., as he has been for 10 years.

But he plans no holiday. “The Fourth of July is a work day for my office,” he said.

Attorney David P. Lynch also will work on July 4. He’ll be launching fireworks for the celebration in Mariemont, Ohio, a Cincinnati suburb. “It’s at a really beautiful park there,” he said, and the fireworks are synchronized with bells. “It’s one of my favorite shows. It’s a small show, but the community is really excited about it.”

An attorney with Amy Noe Law in Richmond, Lynch grew up with uncles who got into the business in the 1980s with a retail fireworks stand. Now, Cincinnati-based Lynch Imports supplies wholesale fireworks for about 2,500 professional shows a year, including displays arranged and produced through the family business.

Lynch sees direct parallels between how his family got into the business and how many of his clients do. “It’s almost always very family centered, typically a couple of guys or a couple of girls sometimes, who are really excited about it, and some other family members who are just going along for the ride.”

Leave it to the pros

Brooke has worked with some of the first families of fireworks such as the Zambellis and the Gruccis, not to mention the Lynches. He also serves as corporate attorney for Pyrotechnics Guild International, an organization of amateur and professional fireworks enthusiasts. Brooke said his firm has clients in 48 states and 22 countries.

But his leadership in a legal niche began as so many things do, with a chance meeting at a watering hole. After a July 4 holiday in the mid-1980s, an acquaintance who owned a Muncie fireworks stand complained to Brooke about all the bad checks he received. Brooke said he was just out of law school with bills to pay.

“It was, ‘I’ll do anything for food’ – that sort of thing,” Brooke said, recalling he took 50 of those checks and collected on 48. The client later invited him to a fireworks convention in Chicago, and as Brooke spoke with people in the industry, he saw opportunity.

“They said, ‘We use lawyers … our biggest gripe about lawyers is we spend half our time teaching them about the business,’” Brooke said. He committed to learn from the ground up, eventually shooting his own shows, making his own shells and helping Indiana lawmakers and policymakers craft rules and regulations that have created what he said is the most robust fireworks industry in the region.

The work is rife with opportunities for travel to destinations such as China and Brazil, and Brooke reckons he sees 40 to 50 fireworks shows a year, including demonstrations.

But he also has learned lessons that he says are too frequently repeated. “I’ve been on enough accident sites and seen enough real carnage where people take fireworks for granted,” Brooke said. “In 2009, I was sitting in my office on the Fourth of July when one of my clients had an explosion and people were killed.

“They say familiarity breeds contempt and that happens a lot in the fireworks business,” he said. “Every time I shoot a shot, every time I mix my own powder, I’ve got to have that level of concentration.”

Don’t try this at home

Lynch has helped or advised hundreds of people who’ve considered making the transition from backyard hobbyist to pro. Without some expert guidance, “They end up violating lots of things they certainly didn’t intend to violate,” he said.

Attorneys say compliance begins with a permit for display fireworks from the Bureau of Alcohol, Tobacco, Firearms and Explosives. The bureau will conduct an interview and, if approved, you’ll receive a display permit that allows purchase of what ATF classifies as 1.3G explosives. Then you’ll need an ATF-approved site for storage.

Transporting shells requires a commercial driver’s license with a hazmat endorsement, a visible placard and liability insurance of at least $5 million. Safety plans are required for all shows. Occupational Safety and Health Administration and other federal regulations also may apply, as will multiple and varying state laws, local ordinances and fire department regulations.

“The minute that you get paid, or are considered in commerce by the Department of Transportation, then you’ve graduated to the big leagues,” said Phil Ramsey, owner of Ramsey Pyrotechnics in Frankfort and a client of Brooke’s. Ramsey puts on displays for the Indianapolis Symphony Orchestra, Conner Prairie, the Indianapolis Indians and others. “You open yourself up to massive amounts, millions of dollars of lawsuits, if you don’t adhere to these safety regulations.”

Ramsey said ATF also monitors displays and checks against permits to ensure the display fireworks are used in the shows for which the permit was issued.

“Folks who think they can do it on the side with a minimum of effort frequently run into trouble,” Lynch said. “The display of fireworks is an inherently hazardous thing to do, and everybody who gets involved with it does well to keep that in mind.

“I like the regulators, and I’m glad they’re there,” he said. “Ultimately, I think if folks can’t navigate this regulatory sea, maybe they shouldn’t be doing fireworks displays in commerce.”

Even among hobbyists, Indiana has become something of a leader in the regulation of retail fireworks even as it made explosive varieties below 1.3G widely available. The state imposes a 5 percent fire safety fee on retail fireworks sales, and the few million dollars collected annually fund firefighter training, Brooke explained. Neighboring states such as Kentucky and Michigan adopted that model as they followed Indiana’s lead in easing retail fireworks restrictions.

More bang for the buck

Stevens, the attorney who works at Brooke’s firm, estimated he’s been part of 150 to 200 shows, from backyard shoots to the $150,000 riverfront extravaganza for the sesquicentennial of Omaha, Neb. That show involved choreographed fireworks digitally fired from three sites.

That background pays off for clients, he said, noting Brooke’s firm also does a fair amount of consulting work for other lawyers. Few lawyers are devoted to the niche full time, he explained, but some larger companies and retail chains do have in-house counsel.“It’s a lot of fun, but it can be frustrating, too,” Stevens said, because the firm works with clients in so many states. “When you bounce between cases, the law can change dramatically. That’s also what’s really fun about the job, it’s always changing, and there’s always a new wrinkle or a new aspect to explore.”

Stevens is taking a break from launching fireworks this Fourth of July, and it appears deserved. In his short time with Brooke’s firm, he’s already subbed as a pyrotechnician, stepping in at the last minute to save the fireworks show at last season’s opening Ball State University football game. After all, the show must go on.

“Fireworks,” Lynch said, “almost all the time it’s so much work, it’s not really any fun until you start the show. While it’s going on and as soon as you’ve finished the show, you’re waiting to hear the crowd response, and when you do … it’s all worth it.”